Set up the Arduino IDE, attach the sensors, and compile and upload some C++ code. Then off to the field!
Wishing you had a fancy graphical interface?
No such luck! It’s an open-source project ;)
But no worries either. This guide aims to carry you through.

This tutorial is a work in progress! Feel free to nudge us or ask questions.

While superceded by more recent data-logger models, the ALog README has some of our most complete documentation. We’re going to reuse some of it as we build this page, but want to give you early go-getters a link to start you out.

We use Arduino because it is a popular system with a large user base, mature software libraries, and extensive support! The information here is tailored a bit more to our sensors and data loggers, but is not as extensive as help available elsewhere on the internet. Here are some curated links to guides:

Arduino is an open-source electronic hardware development platform. For more information on Arduino, go to https://www.arduino.cc/.

The Arduino IDE (Integrated Development Environment) is the current programming environment we use to write and upload programs to the Northern Widget sensors and data loggers. (Other options exist, but this is the most beginner-friendly.) We haven’t yet tested the brand-new web editor, so we’ll be suggesting an old-fashioned download. And if you’re deploying these in the field, you’ll need the downloaded version! Go to https://www.arduino.cc/en/Main/Software. (Windows users: go for the standard download, not the “app”.) Get it, install it, go.

The Northern Widget boards are “third-party” Arduino boards, so you’ll have to set up support for these boards yourself. We’ve made a pretty thorough walkthrough that you can view here at https://github.com/NorthernWidget/Arduino_Boards.

This step is required only if you have to upload firmware to Northern Widget sensors.

Install all Northern Widget libraries and their dependencies

We have a set of custom firmware libraries designed to make your life easier. The only step that you have to take is to install them. Go to [https://github.com/NorthernWidget/NorthernWidget-libraries] and follow the instructions in the README to add these to your libraries folder.

If you are just programming an Arduino board or data logger, which already has a bootloader installed (if you don’t know what this is, it probably has it), then all you need is the board and the USB cable.

The basics of uploading programs

Arduino programs, often called “sketches”, are how you tell An Arduino device what to do. Here is some information to get you started.

When you open the Arduino IDE, you will see a default blank “sketch”:

setup() and loop() are both functions. These are specific sets of code that are executed when their names are called in the code. These two functions are special in that:

Uploading code to the Arduino-compatible device

Once your code is written – either as a copy/paste of this or as your own – save your code. All Arduino sketches need to be within their own folder; the Arduino IDE will ensure that this happens. After saving, you can upload in one of two ways:

If you upload the above code to an Arduino device, it will do nothing, because the code contains no instructions.

If you are programming the board via USB, hit the “upload” button (right arrow) to load the code to the board. (The check mark to the left will test if your code compiles.) Upload the Arduino sketch to the board. (Pay no mind to the specific text; this comes from our old ALog data logger.)

Important note for Linux users: You must supply permissions to the Arduino IDE for it to be able to use the ICSP, or you will have to run it using sudo. The former option is better; the latter is easier in the moment.

Many devices exist to upload bootloaders or firmware, including:

If you are uploading firmware using the programmer, you then go to Sketch –> Upload Using Programmer. After several seconds, you learn whether you succeeded or failed. Hopefully it worked! 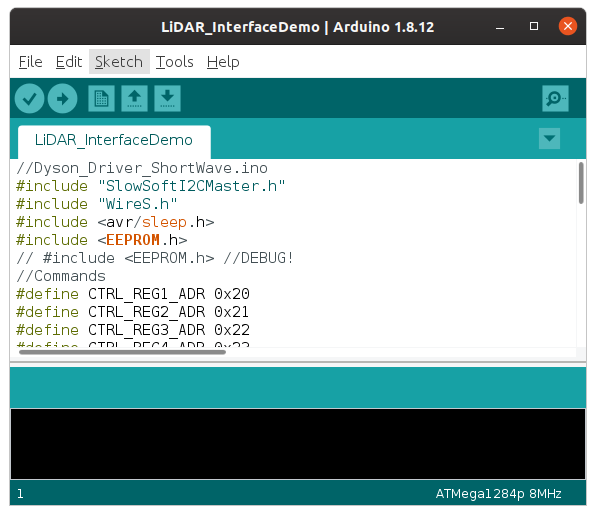 Otherwise, if you are uploading a bootloader, you go to Tools –> Burn Bootloader. If you are doing this on an Arduino or data-logger board, you may have to plug in the USB cable to supply enough power and to go to Tools –> Port and select the proper serial port for your device. (It is not programmed via the serial port though, so I (Wickert) do not understand why you sometimes have to do this.)

In either case, lights should flash on the programmer and board and a message should appear in the Arduino IDE that tells you whether or not you have succeeded. If it fails, try these approaches in order:

We include specific instructions for uploading firmware (or, rarely, a bootloader) to Northern Widget sensors on the README.md pages that appear in our repositories on GitHub. Those that include this information include:

This documentation includes instructions for both the NorthernWidget Margay and Resnik data loggers, as well as code to work on generic Arduino devices.

Each of our data loggers’ README.md pages contains information on programming them, with (at the time of writing) the Resnik data logger having a complete example. For reference, these data loggers are:

A simple program for a Margay data logger, connected to no sensors

This example is a direct copy/paste of https://github.com/NorthernWidget-Skunkworks/Project-Resnik#how-to-write-a-program.

The below program is an example that you can copy and paste directly into the Arduino IDE in order to upload to your data logger. We’ll walk you through what each piece of the code is and does.

@awickert: use a more modern sensor library with appropriate camelCase.

These bring in the two code libraries involved, the former for the data logger and the latter for the sensors. This allows the user to access the classes and functions within these two libraries, as we will show in more detail below.

“Instantiating an object” means that we create our own specific versions of the a class of items. This can be thought of as: Breakfast myBreakfast. Breakfast is the general concept, but I create “myBreakfast”, which I can then modify. In this same way, “Logger” is what we call our Project Resnik data logger, and “Walrus” is what we call our “TP_Downhole_Longbow” sensor; this name is a holdover from an earlier design that is the ancestor of the Walrus. We can then access functions and variables within these two instantiated objects.

We start with an empty header, but will soon add information to it.

Create a list of the I2C addresses of the sensors

This is the trickiest step. You need to know what the I2C address of your sensor is. You can skip this, but then the logger will not run a check to see if the sensor is properly connected.

Let’s make sure that we record this one each page, or find a way to replace this.

Declare the amount of time between logging events

This is the number of seconds between logging events. If it takes 2 seconds to record data, make sure that you give the logger at least 3 seconds between events. The maximum logging time is set by the watchdog timer, which [FINISH HERE]

@BSCHULZ1701: Is there an external WDT on Resnik?

setup() step: runs once at the start

setup() is a special function that runs just once when the logger boots up. In this case, it first adds the Walrus’ header to the header string. GetHeader() is a standard function that lies within each of our sensor libraries and returns this header information as a String. We then pass the header and the I2C values to the Resnik library’s begin() function. This sets up the header and prepares the data loger to record data. Finally, this function calls Init(), which we skip ahead to describe immediately below.

(awickert): I still don’t understand why we have to pass sizeof() and can’t just compute that within the function.

The Init() function calls the begin() function, standard within each Northern Widget sensor library, to instantiate the connection ports (e.g., I2C, RS-485) used to communicate between the sensor and the logger. In this case, there is only one sensor, but two ports are needed: An RS-485 signal goes from the Walrus to the Longbow Widget, which then converts the signal into an I2C signal with its own address. The reason for this is that an I2C signal can travel only ~3 m, but an RS-485 signal can travel ~100 m.

The loop calls the main function of the Resnik library, Run(), repeatedly. This puts the logger into a low-power sleep mode and wakes it up only when interrupted by the clock or the “LOG” button. Update refers to the function described immediately below. UpdateRate is our logging interval defined above.

Update() function: Gives data for the logger to record

The Update() function first calls the Init() function to be sure that the sensor is ready to log. It then in this case delays 1500 milliseconds; this is an ad-hoc solution to the question of how long it takes the pressure transducer to settle after being started up, and is a safe large amount of time. This function then can return a string of all of the Walrus’ readings (one pressure and two temperature measurements) separated by commas. This is then concatenated to a list of logger-internal measurements – date/time; on-board temperature, pressure, and relative humidity; and onboard voltages for battery and solar-panel status – and recorded to the SD card. If telemetry were present, these data could also be sent to a remote location.

First, include the library’s header file, which provides access to its functions:

Next, “instantiate” an object – meaning that you check out an instance of the class within the library. By convention, we make ClassName, the name of this class, be identical to LibraryName. This just makes life easier when there is only one class (or at least, only one significant class) inside each library! To instantiate a library, add a line like the following in an Arduino sketch, below the library #includes and above void setup():

Here, mySensorObject can be whatever you want to call the instance of the object.

Definition of I2C addresses in use

As noted in the Resnik example above, this is the trickiest step (but one you can skip) because you need to know the address of your sensor. If your sensor does not have an I2C address, then you may also skip this.

We are hoping to find a way in the future to avoid the need to enter this information by hand.

The most important functions for our standardized sensor interface are:

We use a combination of doxygen and moxygen to auto-generate documentation for our firmware libraries. These are currently available for:

This could be a really short add-on to the above section, could be a way to summarize/wrap up, or could be superfluous.

Could also include troubleshooting?